The Story of a Loose Tooth

Once upon a time, Jenelle had a wiggly tooth that she really wanted to lose before we left for Texas.

I told Jenelle that her tooth probably wouldn't come out before our trip...it wasn't that wiggly.

Jenelle wiggled her tooth day and night and within a few days, it was CRAZY wiggly...like "just hangin' on" kinda wiggly.

Jenelle started to fear that she would lose her tooth in the swimming pool at the next swim team practice...which was in a few hours.

I told Jenelle that I would pull her tooth out for her.

I told Jenelle that it wouldn't hurt.  I took a tissue and made a great effort at pulling her tooth out.

Nothing except a desperate scream from Jenelle to STOP!!...and some tears.

Jenelle was very upset with her tooth and me and swim practice.

I told Jenelle to pull her tooth out by herself - certain that would never happen.

Jenelle surprised us all...and herself...by pulling her tooth out with one small tug!

I told Jenelle I was proud of her!

Jenelle went to swim practice happily ever after. 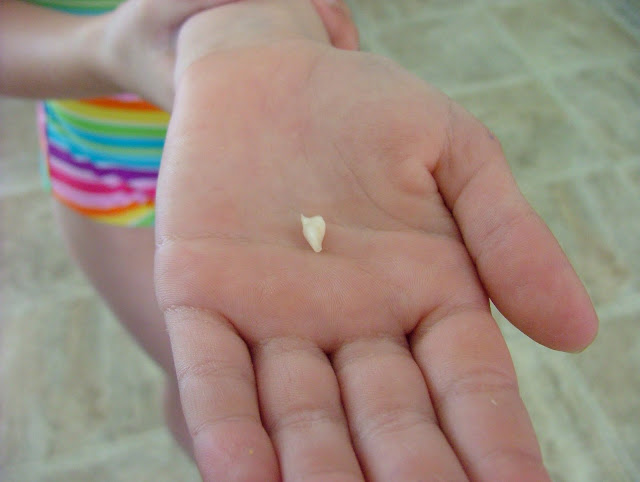 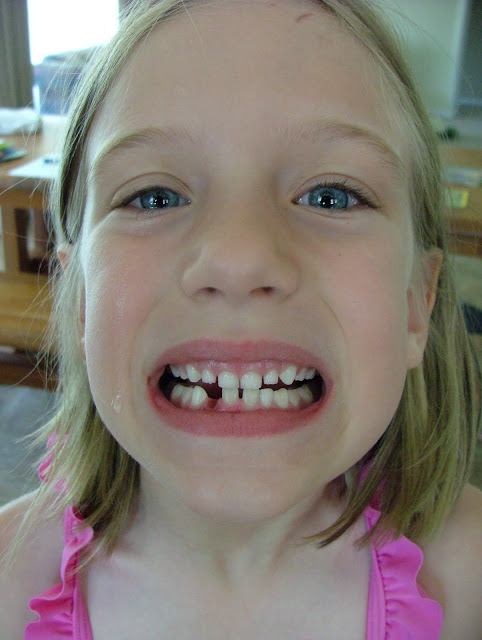 Yellow is my favorite color...
But even if it wasn't, these would change my mind. 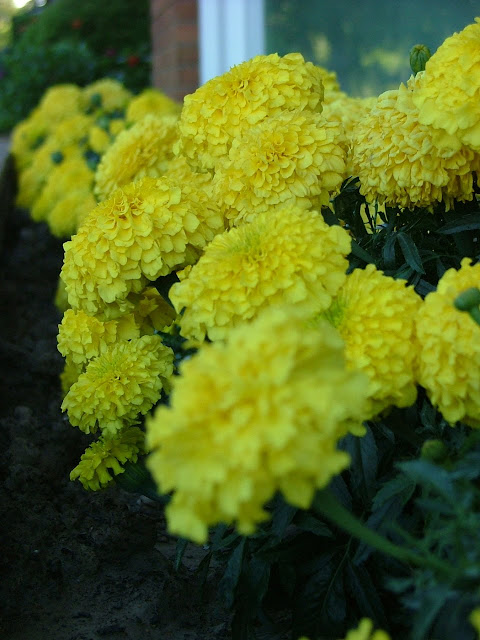 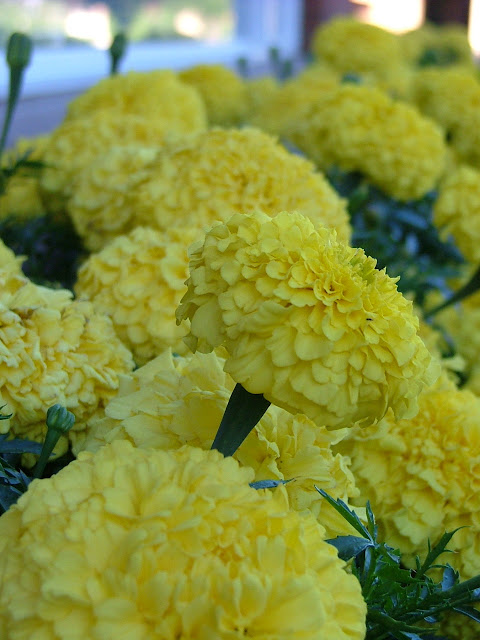 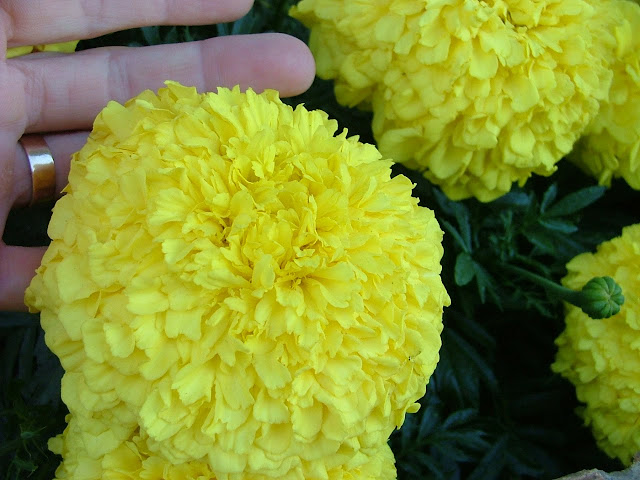 One of the things on our summer list was going to a U-pick farm.  Renee knew of a blueberry farm not far away, so we packed up the kids and headed of to pick a "few" blueberries for $1.50 a pound.  If you pay attention to prices at the grocery store, you know that's pretty darn good!

We grabbed a few pails, learned how to identify a blueberry that was ready, and started picking...and eating...just a little.

These were no puny blueberries - 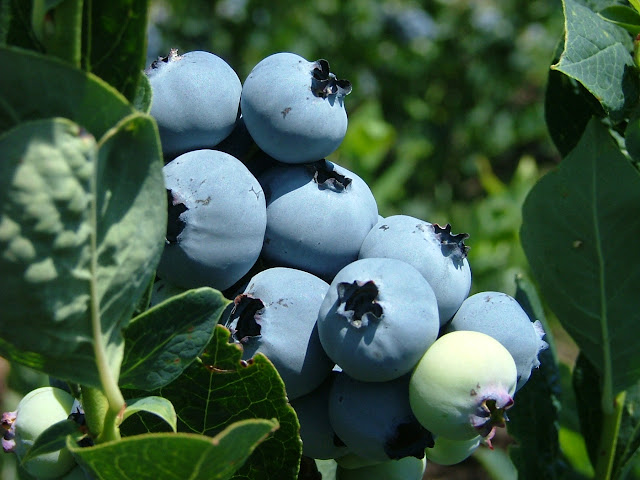 And these were no ordinary blueberry pickers - 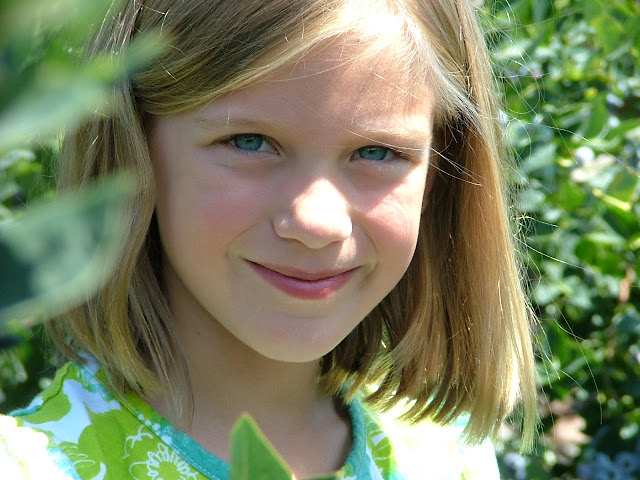 (thanks Renee for the awesome picture of Jenelle) 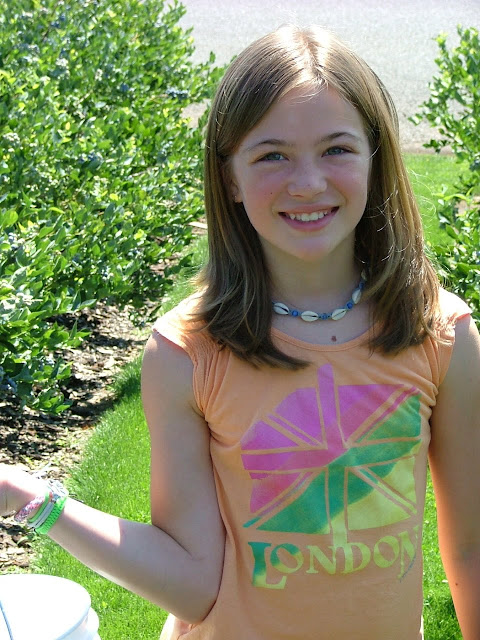 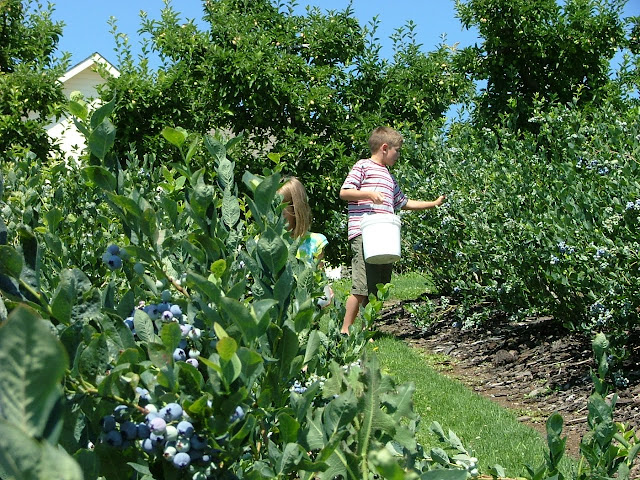 I brought $10 and knew I would have change because, really, who could pick that many blueberries.  But, as I checked their pails, I started to get a bit nervous.  We called time-out on picking and weighed in.  Eight pounds later and $2 extra from Renee, we returned home.

What do you do with that many blueberries?
Freeze some.
Give some away.
Bake some.
Eat the rest!

In addition to a lot of blueberries, we also have squash-a-plenty on hand from Donald's summer garden. 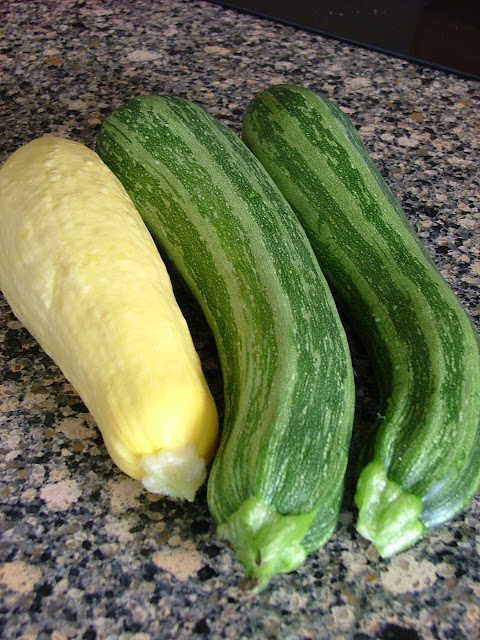 With so much zucchini, I went looking for recipes and found this little gem.  It makes enough for 12 muffins and a loaf.  And it is DElicious!  Fresh summer fruits and veggies are a beautiful thing!
Posted by Michelle at 8:33 AM No comments:

Within a four day period, we celebrate Hannah and Ivan's birthdays!  This year has been the year of cool and unusual birthday "cakes".  Jenelle celebrated hers in May with a chocolate pie, so when it came time to for Hannah and Ivan to decide, Hannah chose a lemon meringue pie, 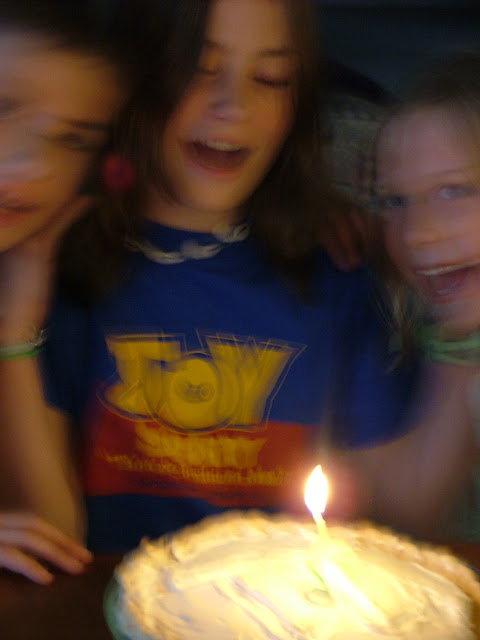 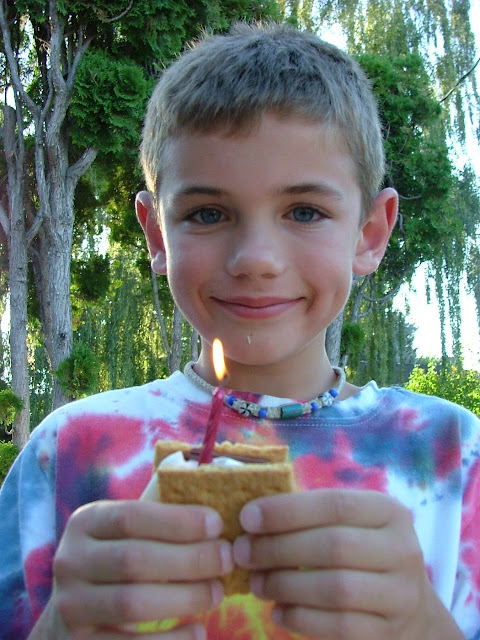 This could easily become a new family tradition!
Posted by Michelle at 8:18 AM 1 comment:

What's Going on with Larry?

Well, Larry came to the end of his life last weekend...ironically on Ivan's birthday.

Donald wanted to make sure we harvested him before he split and became unpresentable...or unedible.  Whether or not Larry WAS presentable can be left up to you...he was mighty tasty to many creatures who left their marks.  But, love is blind and Ivan was very proud of his cabbage...as he should be! 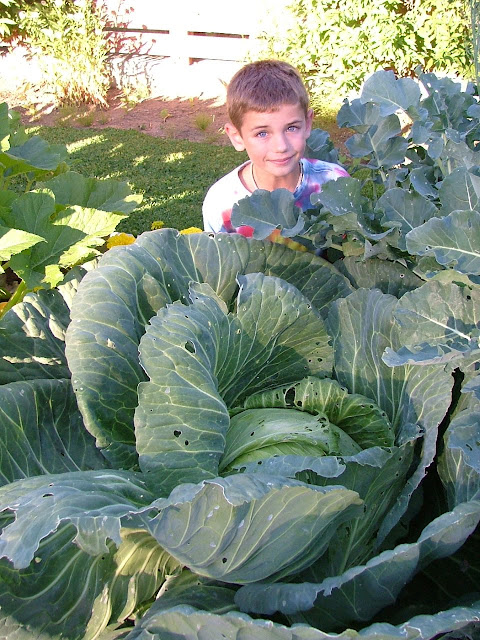 You should have seen the amount of slugs we found living under Larry - it was revolting! 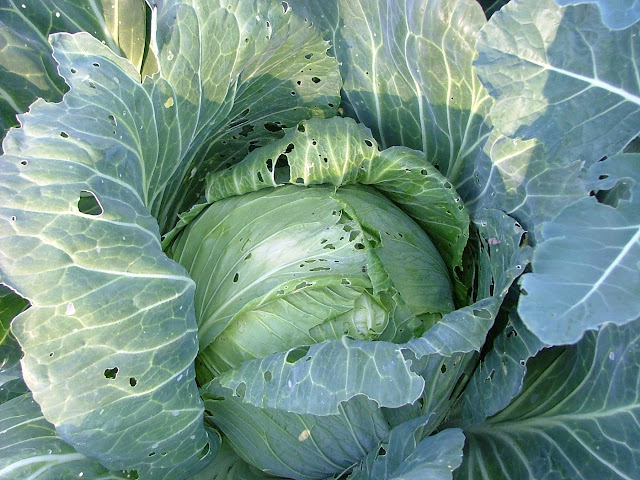 This is what the leaf of a 28 pound cabbage looks like! 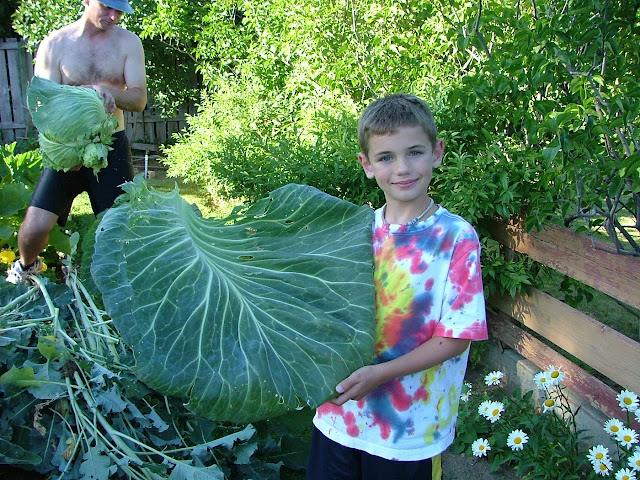 Donald cleaned the cabbage up and we all tried a bite. 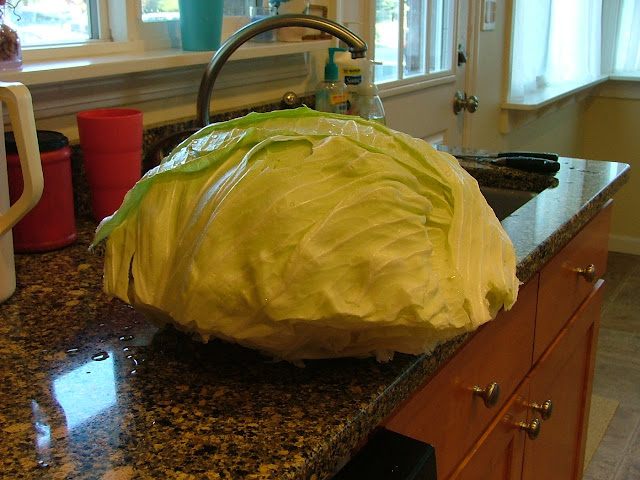 Even SHE loved it! 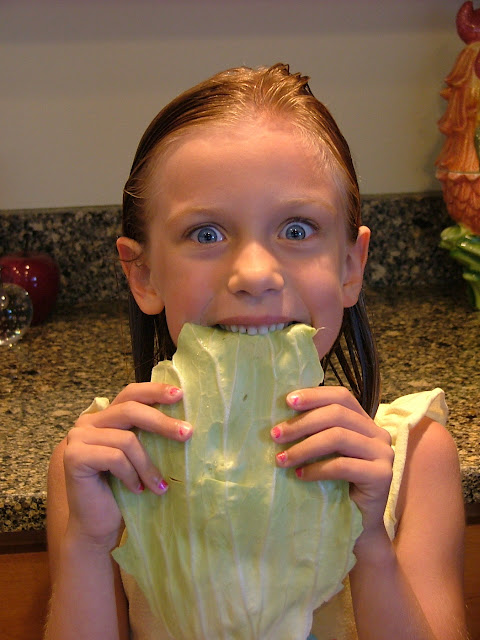 The story has a bit of a sad ending.  The next morning I started to cut Larry into workable pieces.  When I took the first deep slice, I found lots of brown/decaying leaves layered among all the good ones.  Something went nasty inside Larry and we decided, since the cost of cabbage at the grocery store is pretty darn cheap...and we didn't really want to try to consume 28 pounds of cabbage within the week (can anyone say stink!)...we'd have to let Larry go to vegetable heaven...the compost pile!

When school starts I'll send a pictures and information sheet to school with Ivan so he can enter his cabbage in the $1000 scholarship contest.

Go Larry and thanks for the memories!
Posted by Michelle at 10:25 AM 1 comment:

We went to Texas this summer, and once we got back, I put off blogging for a while...then a while turns into a long time, then pictures pile up and lots of random things that I think the whole world needs to know come in and out of my head and before you know it the thought of sitting down to type is overwhelming.

But, it needs to be done.  Well, the term "needs" could be debated, but its going to get done nonetheless.

Late June/early July...undoubtedly the best time of year to head to the humidifier we call home.
Well, that's not actually true, but anytime of year is just right for hanging out with grandparents,
moms and dads, brothers and sisters, aunts and uncles and cousins...basically every member of our family!

Here's some of my favs -

Chillin' (actually sweatin') in Crosby.  Its hard to believe it...they look pretty comfortable in the picture.  Don't be fooled.  It was hot.  Really.  Hot. 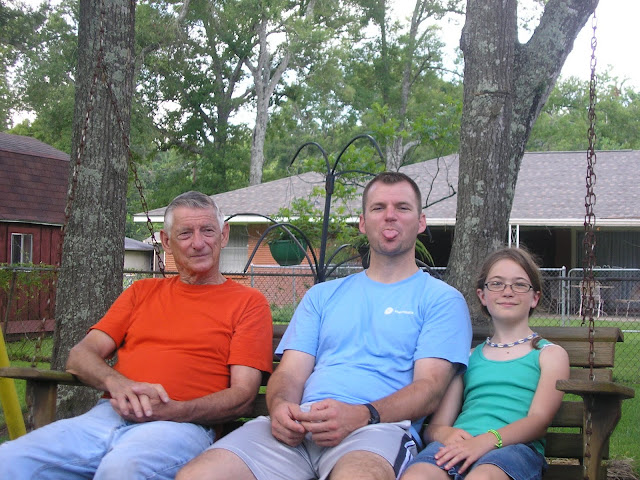 Jenelle's being eaten by a Houston Zoo water fountain.  It's for sale at the Red Rooster Antique shop in New Braunfels for a mere $1200. 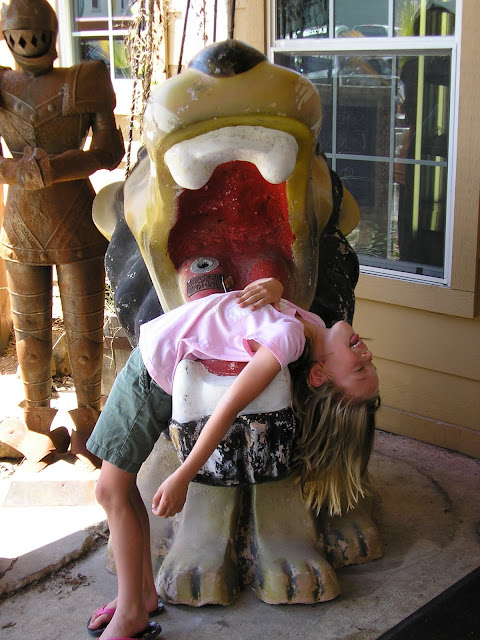 A hot, sweaty and mosquito bitten boy at Mt. Bonnell in Austin.  He must be a tasty boy because he was chewed alive for most of the trip. 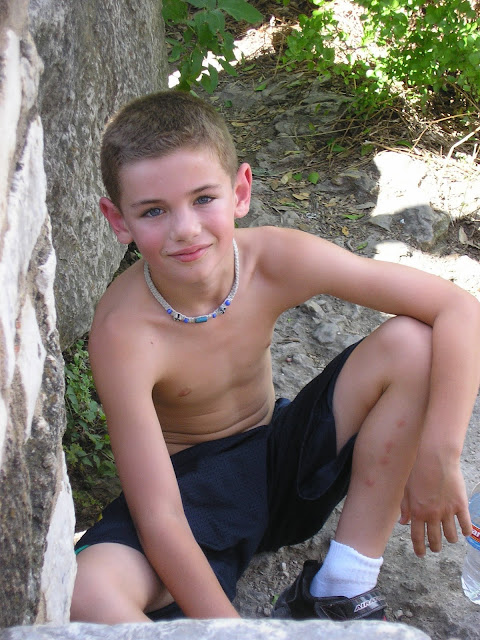 This could be the most awesome pool view in the Hill Country.  They swam until the thunder and lightning got too close...which wasn't very long.  Then it poured.  Really.  Poured.  There's no halfway in Texas! 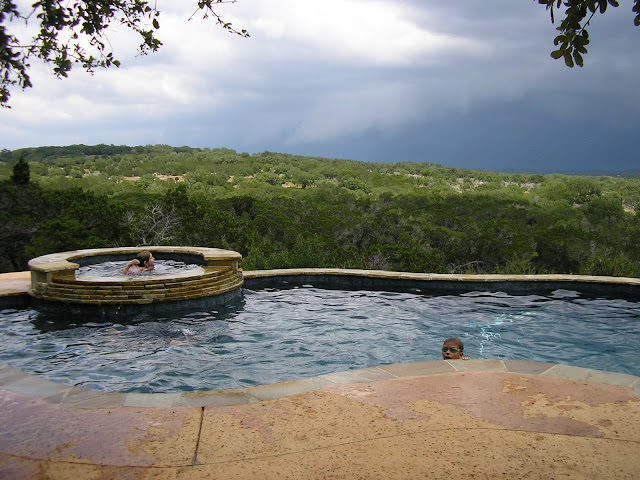 The girls and MawMaw Vick 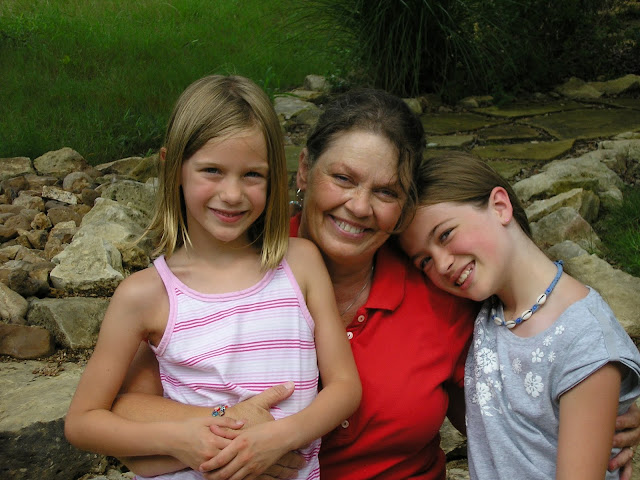 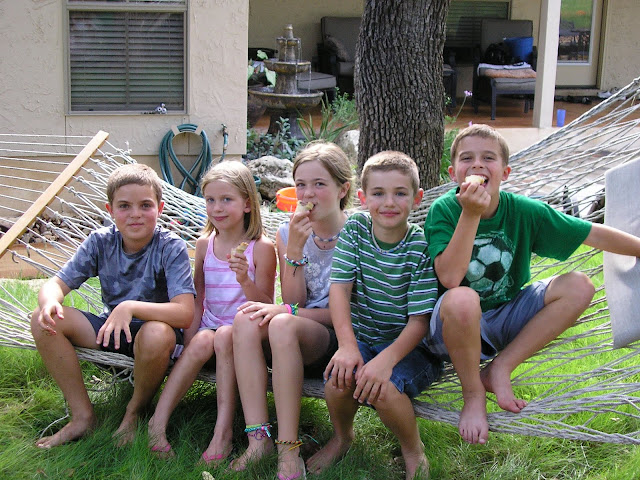 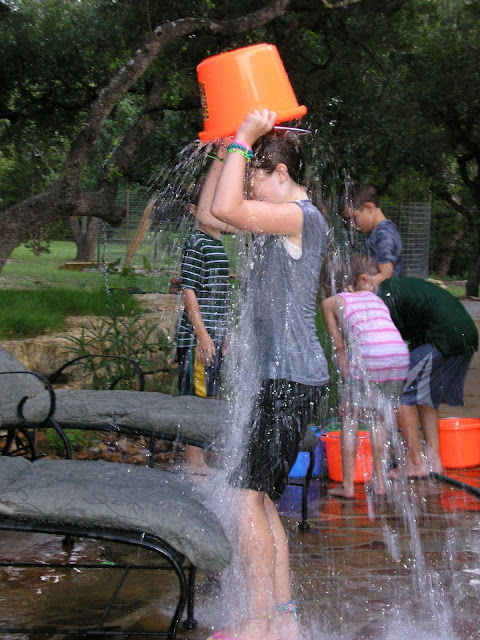 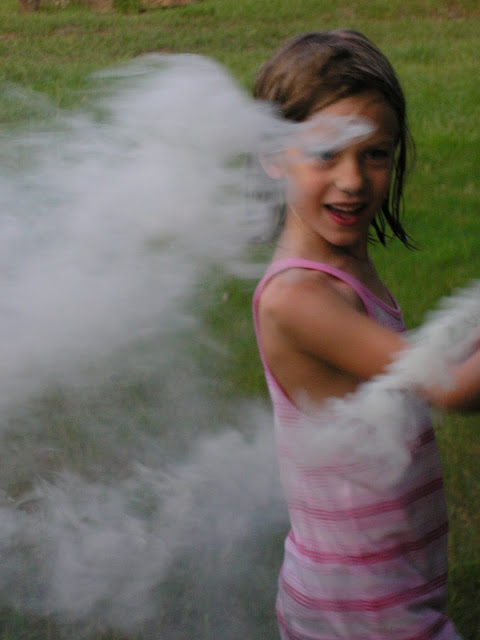 I loved the kids got to play in a trough at the ranch just like I did when I grew up. 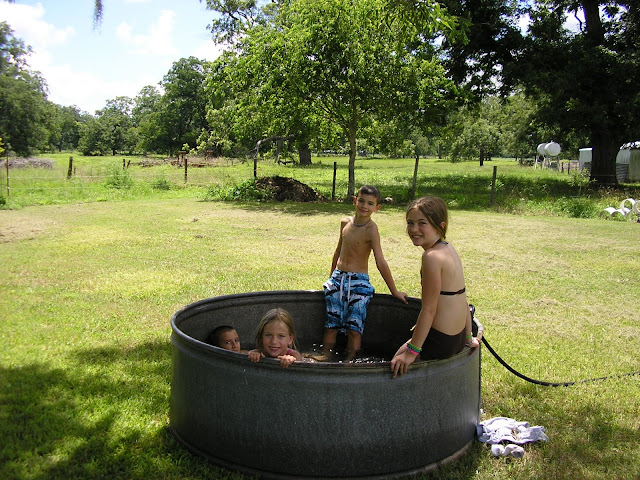 We made sure to get some pictures before the tears - time to say goodbye!