It started with an egg hunt at a local high school.
The morning was chilly, but the sun was out and it was going to be a pretty day.
Here's my hunters... 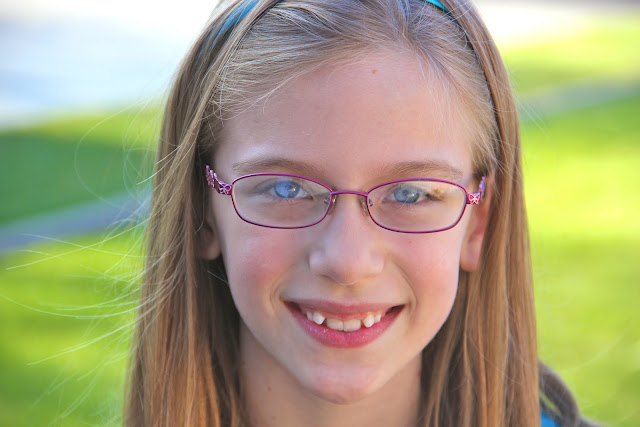 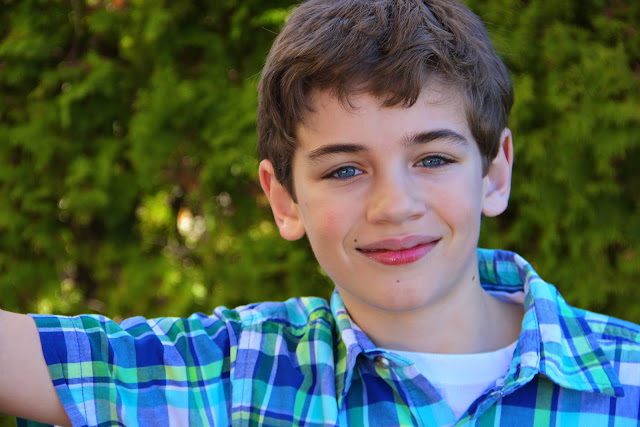 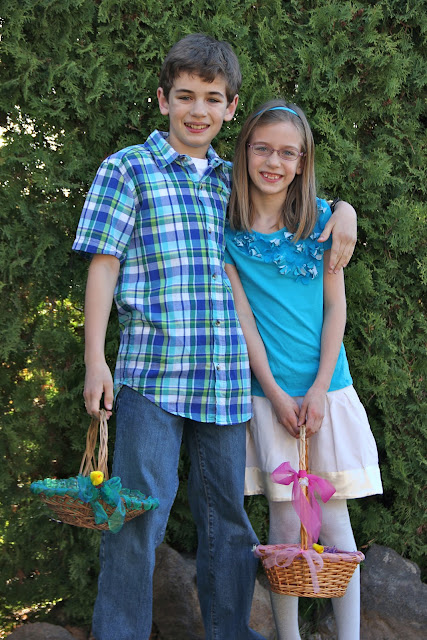 Notice anything?
Yes - Hannah decided that this year she wasn't going to hunt eggs.
Totally underestandable...but a bit sad too.
Not even candy could entice her!
The best part of egg hunts is watching kids in nice clothes holding pretty baskets run like crazy to get the loot! 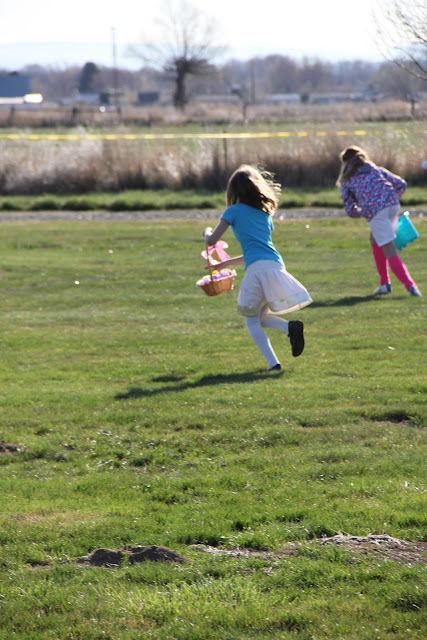 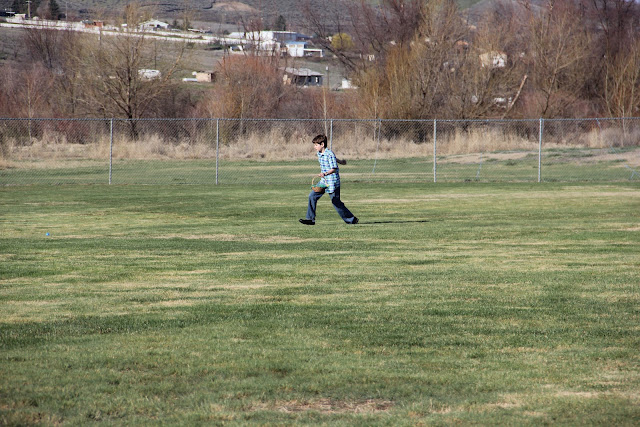 Speaking of baskets - I love the ones they have used for so long.
I remember my childhood Easter basket too.
I had the same one each year.
I see cute baskets in the stores every year but they can't replace these wicker treasures.
Jenelle's basket actually first belonged to Hannah.
Hannah used it to hunt eggs on her second Easter. 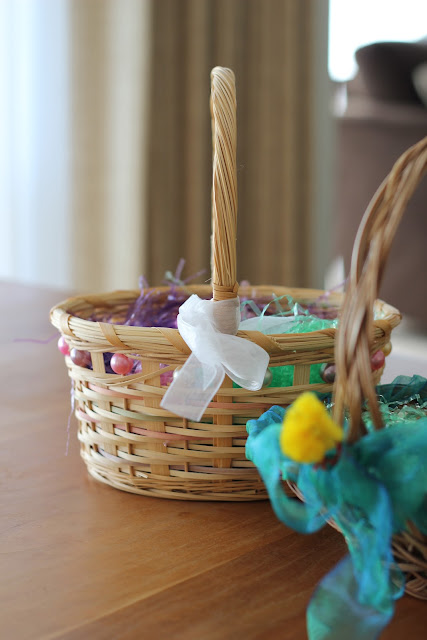 When we moved to England, some of our things hadn't arrived in time for Easter, so I found two baskets at a charity shop on the Cheltenham High Street.
I bought a few ribbons and little chicks at a craft store and pieced together a basket for Ivan 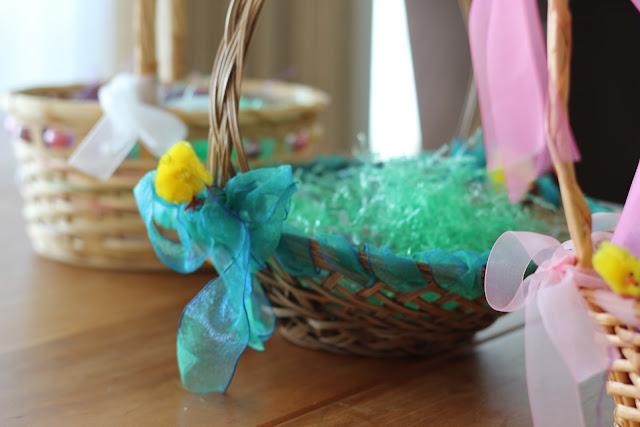 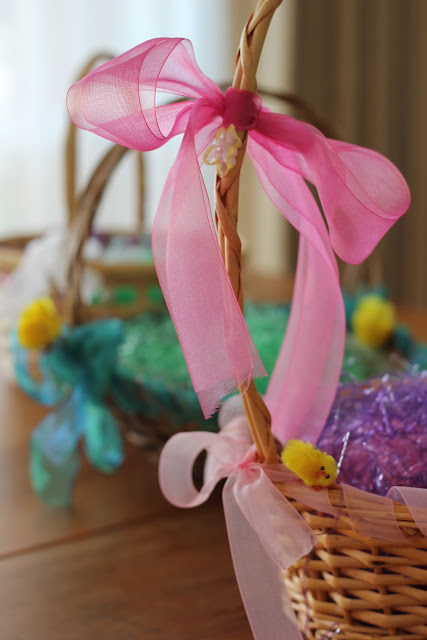 ...giving Jenelle Hannah's original.
(Poor thing...story of her life!)
The little chicks were added on with a hot glue gun and I'm amazed that after 10 years and lots of use, they are still hanging on. 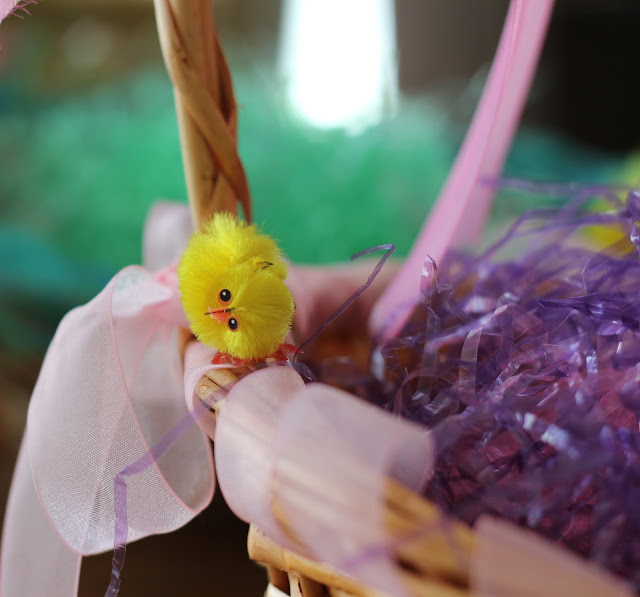 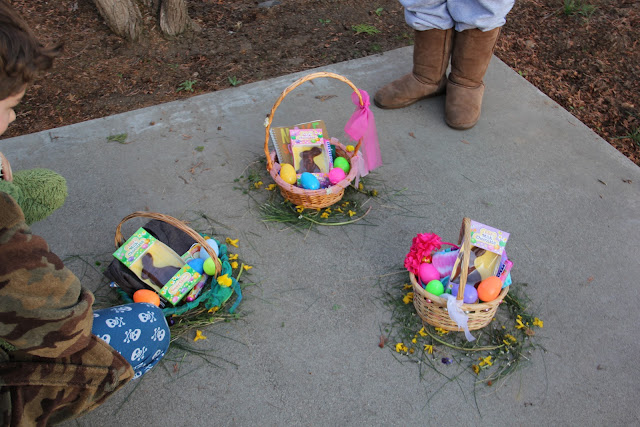 and the egg hunt begins! 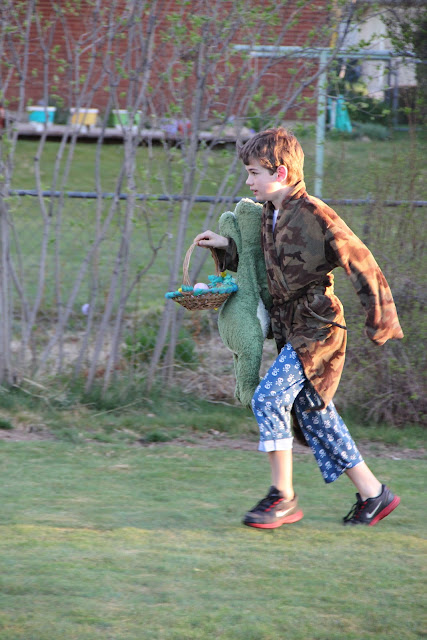 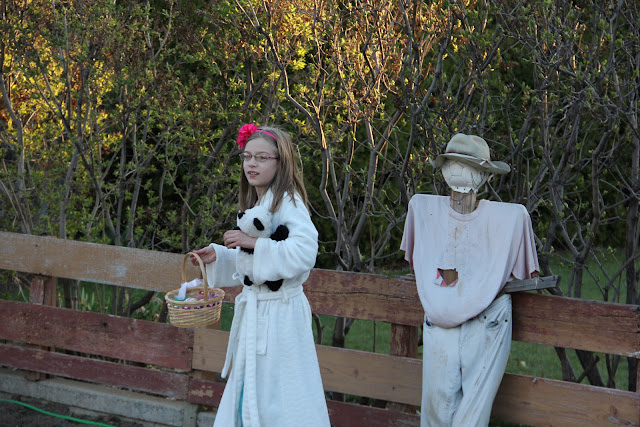 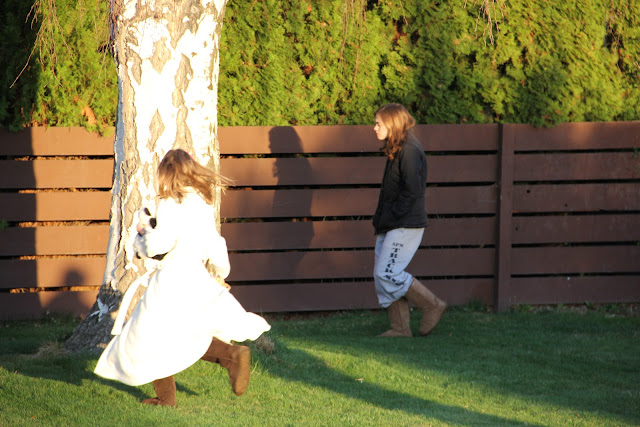 This year Hannah didn't hunt the eggs herself, but she decorated eggs, helped Jenelle find some eggs, ate eggs and even made some delicious deviled eggs!

It was a beautiful day - one of the prettiest we've had in a long time! 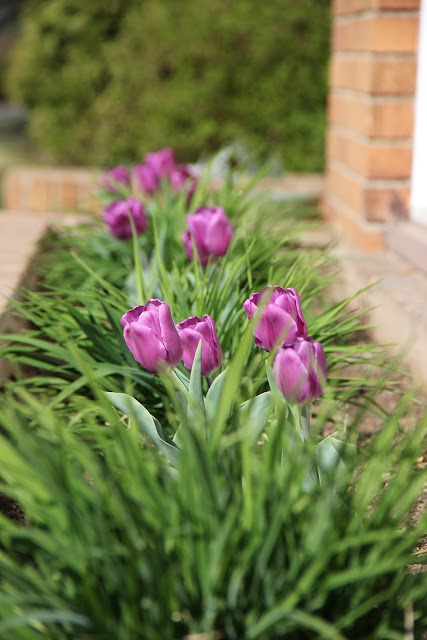 Over the past 40 days of Lent, as a family we agreed (or were coerced - Jenelle and Ivan)
to give up meat entirely.
We did eat fish on Fridays while St. Joe's had its "Fish Fryday" fundraiser, but besides that we were meat free.
It was really not as difficult as anyone thought, and in fact, we plan to keep meat at a minimum in the future as well.
But - to "celebrate" our 40 days ending, we decided to go all out and Donald smoked ribs and that smell on Easter morning was amazing!! 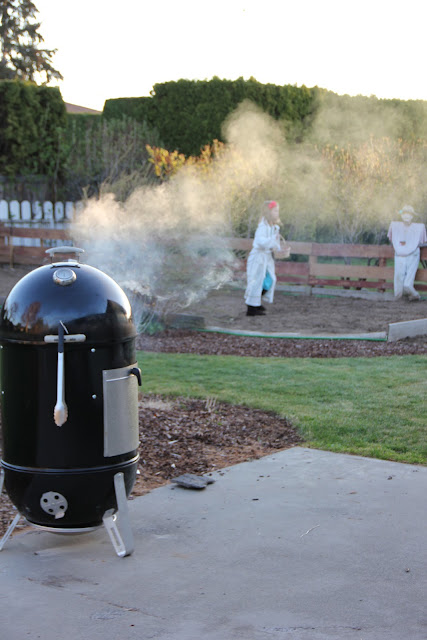 A delicious "Bunny Butt Cake" topped off our yummy meal. 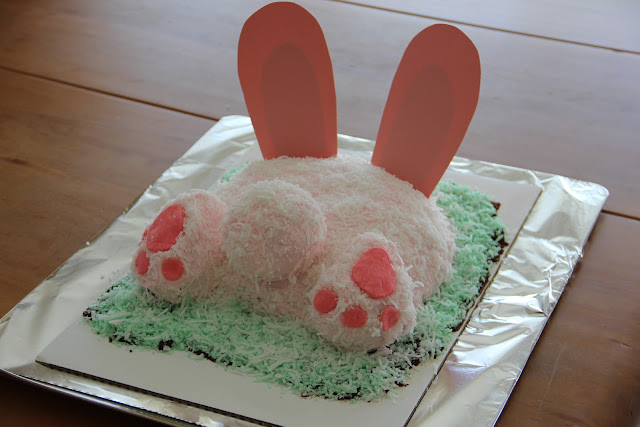 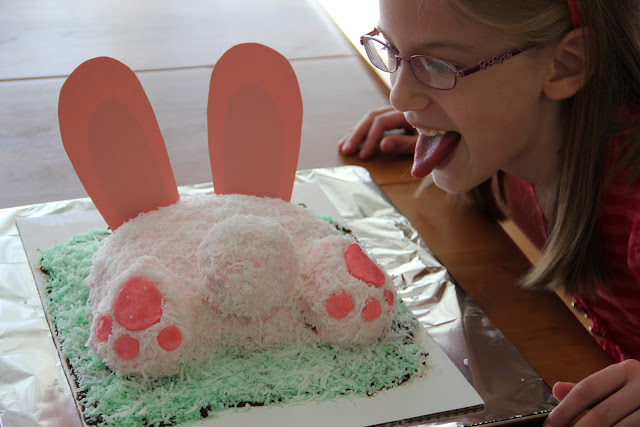 so we made her an individual cupcake with frosting and chocolate chips and Hannah even cut out hearts from the same candy that was on the cake. 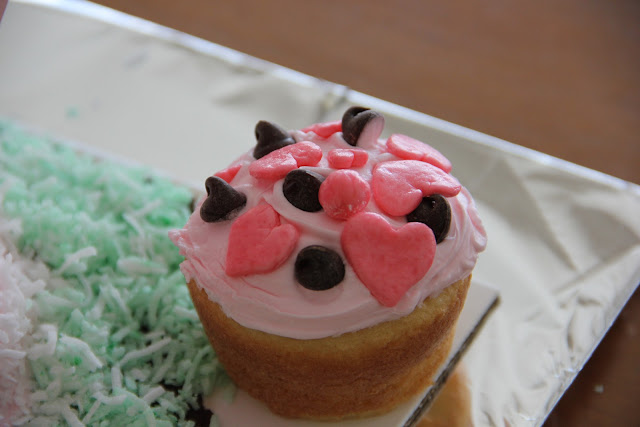 And while I like the pictures above for presentation purposes, this is what we all agreed the bunny would really look like... 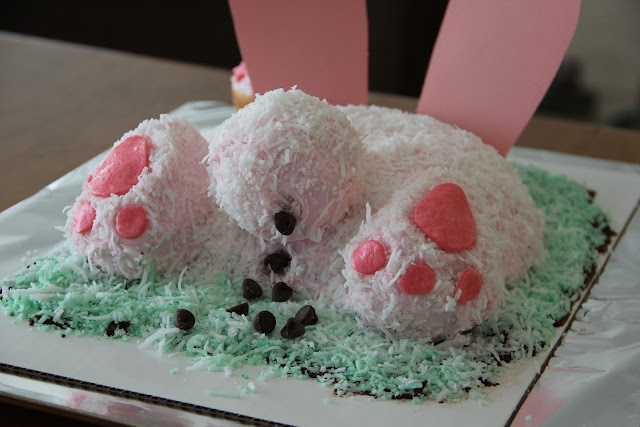 Yum!!
After dinner Jenelle played "Happy Birthday" on her viola for Grandpa who's birthday was the next day! 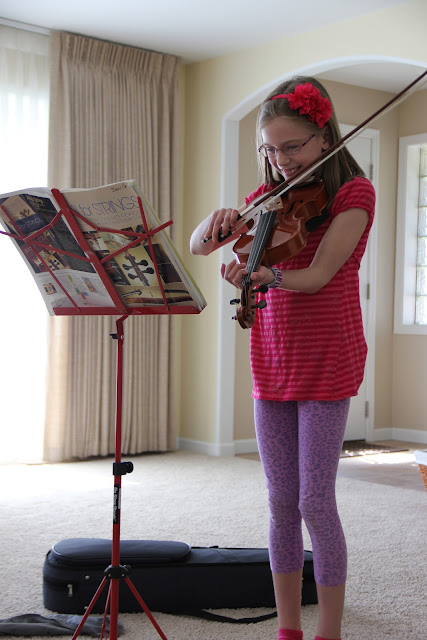 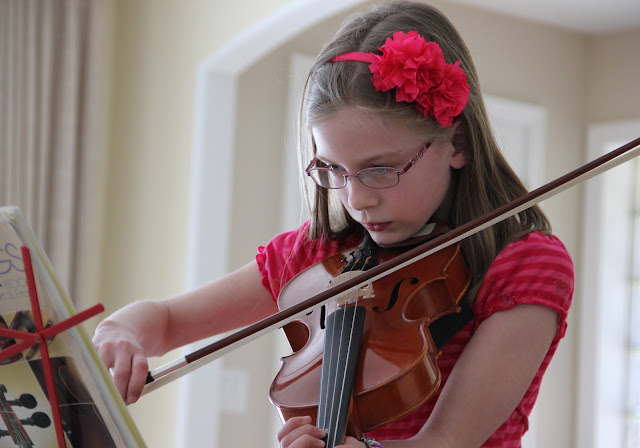 And speaking of Jenelle and her viola...watch for more news as summer approaches.
She has decided that she wants to be a part of the YYSO...the Yakima Youth Symphony Orchestra.
She has a scheduled audition on June 8th!