Yes...we have managed to go on without him.
It's a safe and comfortable life too.
No feeling of fear or need to duck for cover when we go outside.

Earlier this month, Ivan and Jenelle attended a week long Nature Day Camp at our local, and very beautiful, arboretum.
This was a five day, six hours per day, camp that taught the kids just about everything you would want to know regarding the local flora and fauna...with a lot of fun and games and popsicles mixed in. 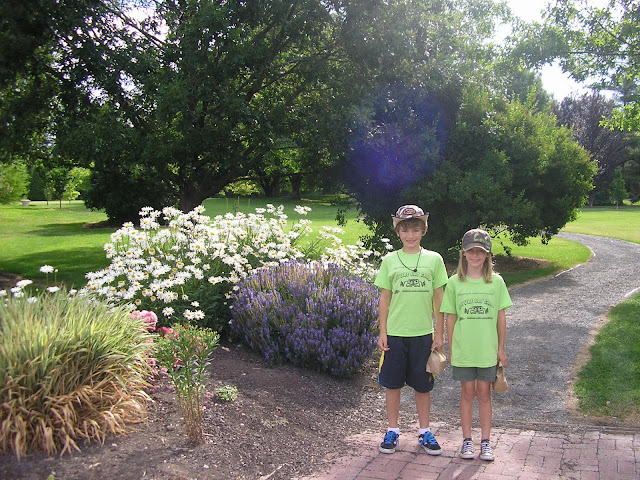 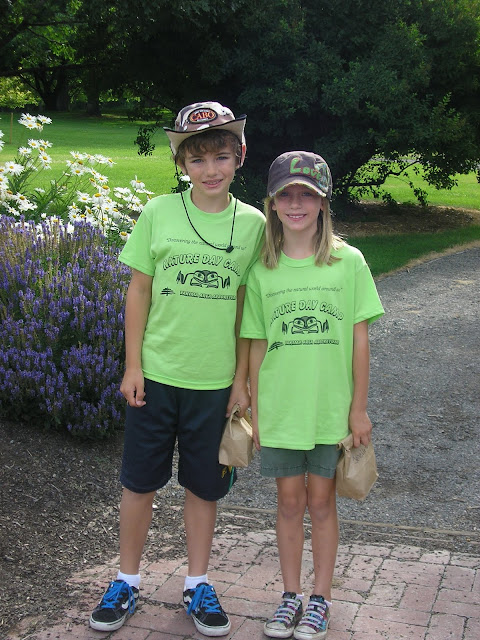 They really loved it!
Despite warm temps, long hours and mosquito bites, they came home each day ready to go back for more.
The ONLY concern that had to be dealt with, particularly by Jenelle, was...MO!
If you remember, this is the same place that I brought Mo, and in the weeks ahead of the camp, we laughed and joked about how he was probably terrorizing the happy-go-lucky (unsuspecting) people visiting the arboretum.
It was all good fun and laughs until it was HER turn to be a happy-go-lucky visitor.
I had to lay it out there...the truth is he probably didn't make it.
But...if he was still flying about some where, no doubt he was done with us!

It worked and she had a wonderful worry-free time.

I have to admit that I do miss Mo a little.
I can hear bird calls that are just like his and for a second wish that he would come flying out of the trees.
With all its crazy ups and downs, it was a great experience for sure.

Now a couple of totally random pics...just because...
Some of you may have seen some of Hannah's manga or anime drawings.

Of course I'm her mother, but I think she's quite good.
She draws all sorts of characters, but in this case, kids in her class were required to do a self portrait of some sort, so she choose this style that she's become very adept at drawing. 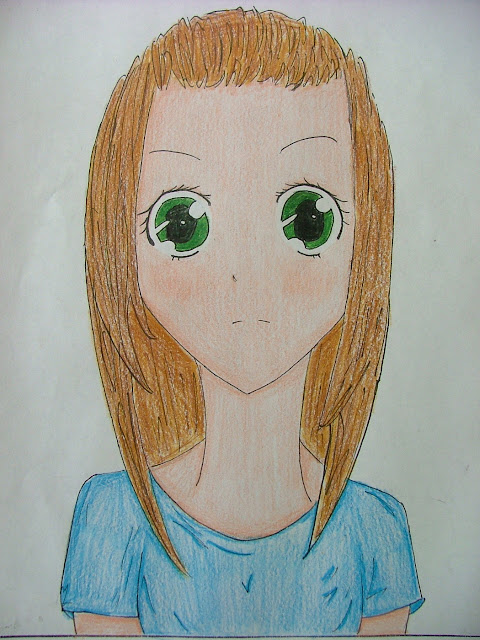 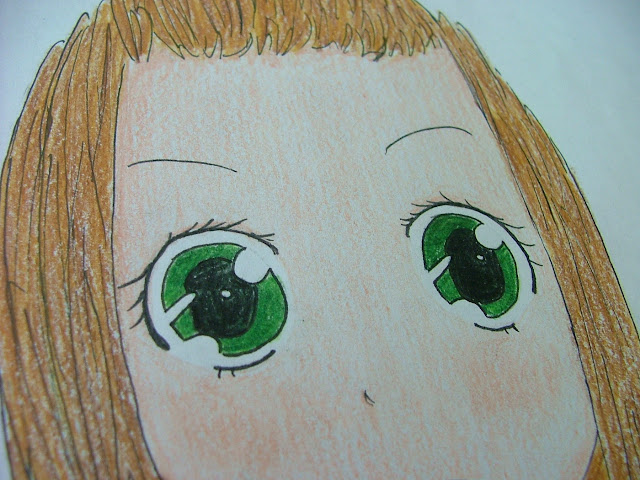 This summer I bought some canvas and paints so the kids could paint pictures for their rooms.
Ivan and Jenelle worked on theirs the week Hannah was at camp.
Ivan's into Mario Bros. big time right now... 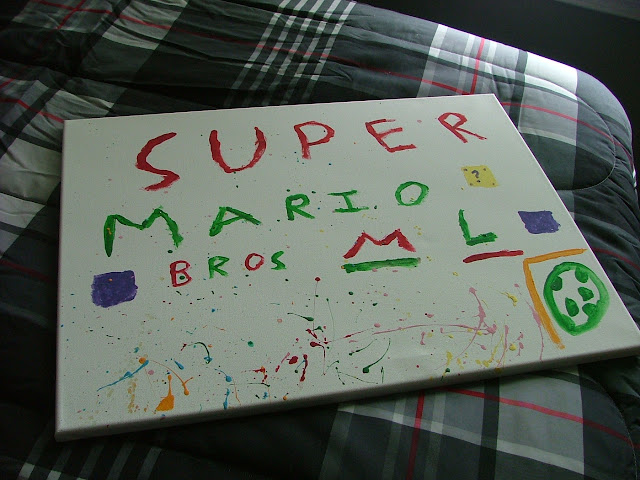 There's all sorts of symbols that have to do with the games...and even a little Jackson Pollock splatter effect going on at the bottom. 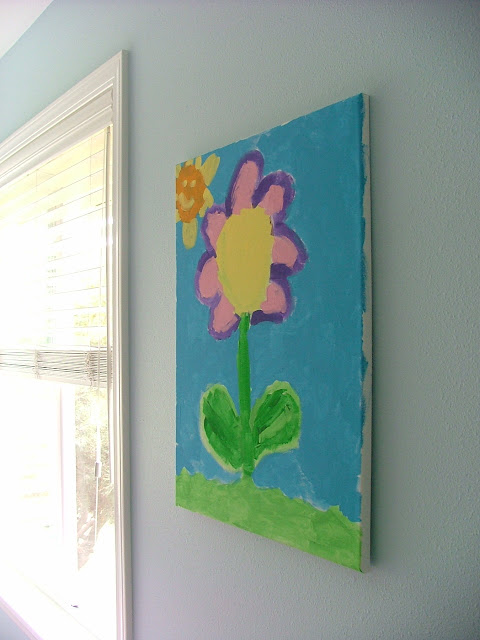 These were fun and can be exchanged each year for a new design!
Hannah has completed hers, but no picture yet.
Posted by Michelle at 7:28 AM 1 comment: 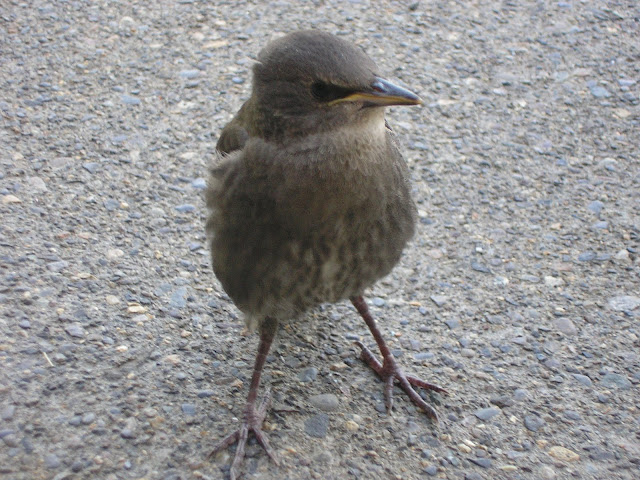 
Let me set the scene for you:
Kids enjoying chocolate covered popsicles for dessert after dinner in the front yard under the maple tree.
Mom planting marigolds in the flower beds.
Warm sun setting and a relaxing end to the day.
But hark!  What is that familiar sound I hear?
Oh...must be my imagination...
Nooooo!!!
Mohawk dive bombs the family -
- like Jack Nicholson from The Shining, "Honey, I'm hoooooome!"
(notice all the horror movie references lately?)
Kids (and Moms) scatter like chickens...making mad dashes for the house!
He's right behind us...and he's HUNGRY!!
I didn't have any water soaked cat food for him BECAUSE I thought I'd never be feeding him again!
I grabbed a piece of lunch meat and starting shredding it fast.
He gobbled that up and then went after my toes.
I think he was a little mad about the abandonment earlier in the day.
This is getting absurd.
I managed to get him back into the box and this time I drove him to the arboretum.
Much further away from us, and an even nicer place for Mo to retire. 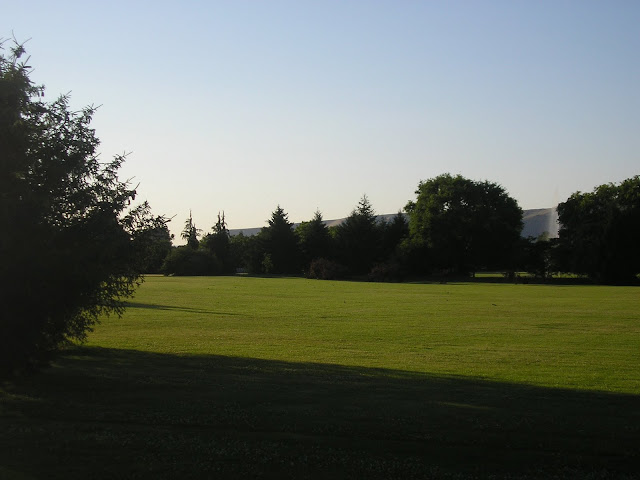 Please.
Please!
PLEASE don't come back Mo!
It's been a grand experience - really it has - but we need to go our separate ways now.
Find a girlfriend and a nice place to settle down and stay there!
Posted by Michelle at 9:06 PM 4 comments:

Not in a bad way - don't worry!
We took Mo to a nearby park this morning and let him go.

I'll be honest - I don't think he wanted to go away from us.
We set a box down on the grass and opened it up.  He flew out...
...and right back again!
We fed him a few more bites of food started to load up.
Well, he was having none of that and the whole situation started to turn into some circus act.
Kids freaking out!
Mom freaking out!
"Get in the car!  Get in the car!"
They made it in, but left me out there alone with the bird NOT letting go!
He finally flew off to a nearby tree and I took my leave!!

So here's how the past few days have been playing out...
Mo started expanding his horizons and instead of us always seeking him out... 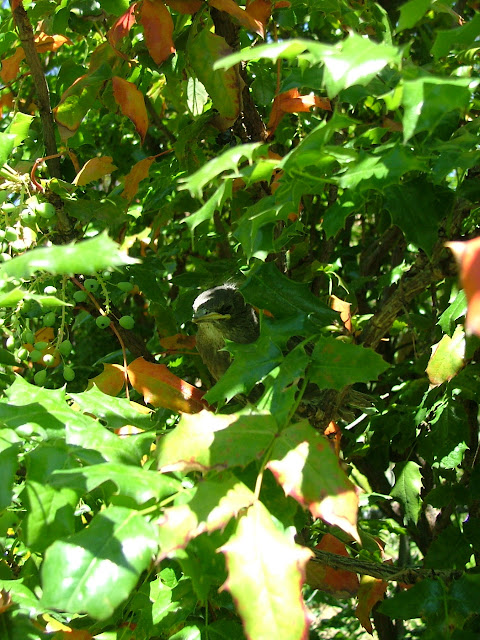 ...he began to seek us out (insert Jaws soundtrack here). 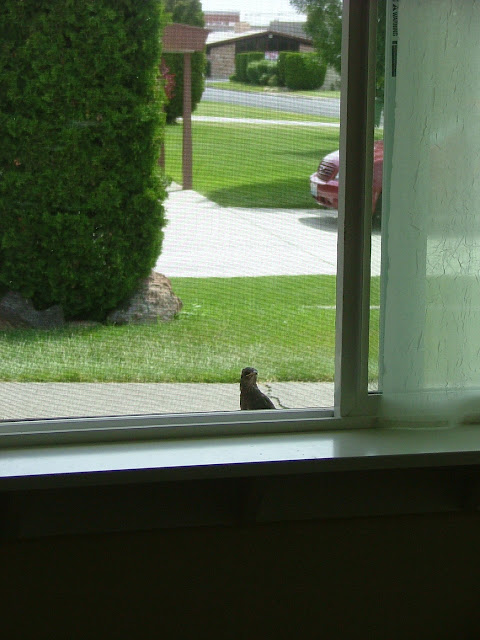 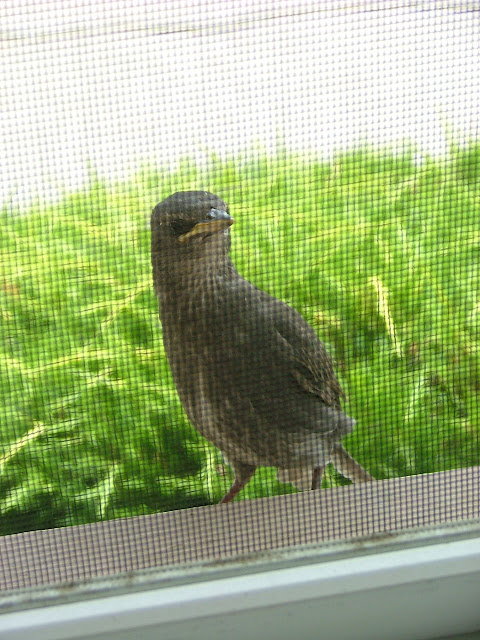 Very cute - I do realize this.

Anyway, each time we would go outside, for any reason, we were spotted by his sharp eyes and he would fly to us. 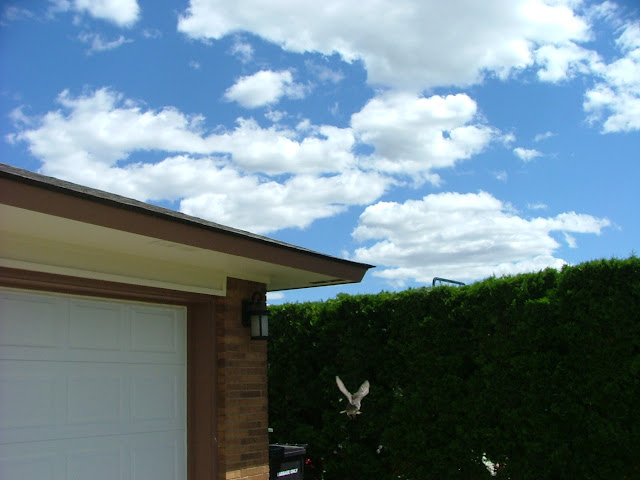 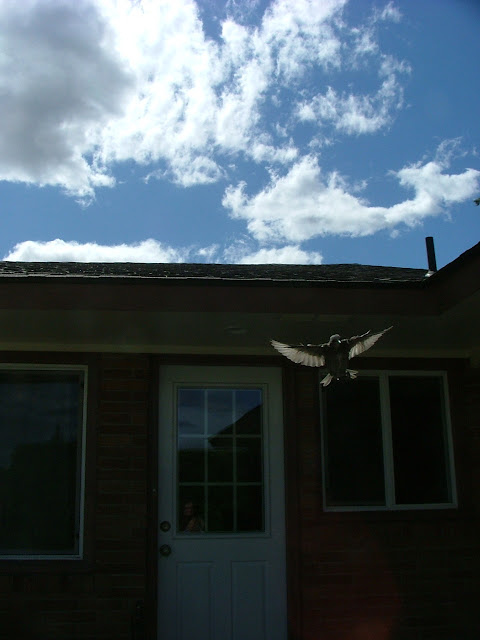 Whether we were ready for it or not! 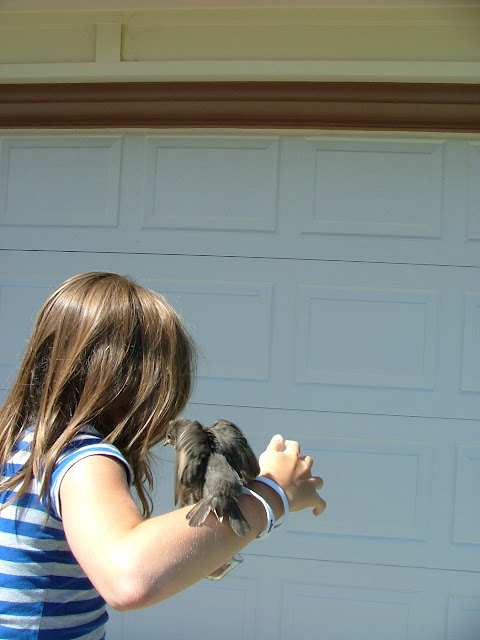 As cool and amazing that I know this is, it had become a nuisance.
He was getting pretty aggressive and once he landed on your arm/shoulder/back/head, he demanded to be fed!
I do mean demanded because he would chirp and chirp and CHIRP loudly until fed! 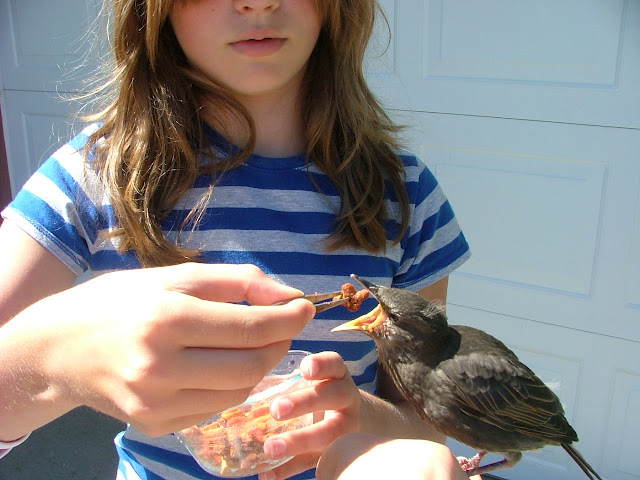 Hannah and I had no real problem dealing with this...although he has gone after her feet with his beak and I swear he was going to peck my face off a few times while on my shoulder!

The real trouble is that WE weren't the only people he thought would feed him.
It was going to get to a point where Jenelle would never leave the house again!
Our neighbors were starting to mention how Mo was flying down onto them when they were outside.
And when their guests came over, it happened to them too.
Some of their guests are small kids and some of our neighbors are elderly folk.

It came to a point where it was no longer realistic to have a "pet" wild bird.
A bit like a certain Alfred Hitchcock film...except starring ONE bird.

So.
Mo has a new home in a neighborhood park.
There are plenty of trees and grass and areas for birds to make homes and find food.
I am worried a bit about the food part, but he had been pecking at bugs on tree branches and forging for things on the ground, so he should do just fine.
I felt sad when we finally managed to 'escape' into our van and get the h%*# outta there, but it had to be done. 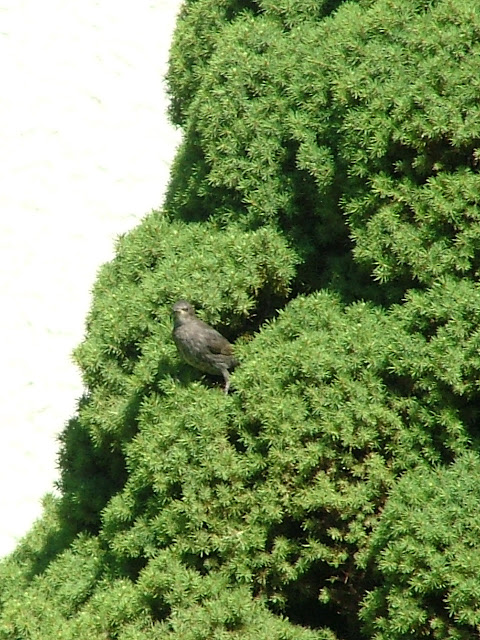 I've no doubt that as handsome as Mo is, he'll soon find a mate and build a nice nest and have a nice life.
We've been given an experience that not many get, so we are grateful for the memories.
But let me just say this...